The Total Number of Words in 11 Collections and 308 Poems

Anne Sexton’s published works sized according to the number of words per collection.

The Most Frequent Words In Anne Sexton’s Published Poems

The overall sentiment conveyed through Anne Sexton’s poems is negative.

“Nothing escaped her. She saw everything. The intervals between the pain were her poems.”

Discover Anne Sexton’s Feelings Through Each Poem in a Collection

Each dot represents a poem within a collection. Mouseover a dot to explore the sentiment for each poem.

A Poet Rises from the Ashes

To Bedlam and Part Way Back 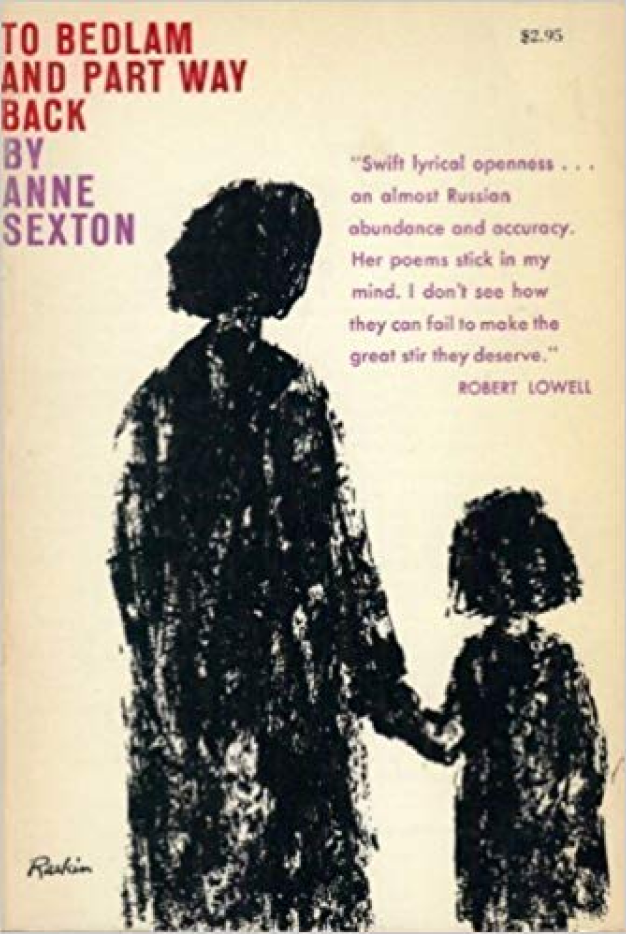 To Bedlam and Part Way Back, published by Houghton Mifflin was Anne Sexton’s first published collection. It is a collection of works that encapsulates her struggles with mental illness, postpartum depression, motherhood, being a housewife during the ’50s and the grief of losing her beloved grandmother “Nana” in 1954. The poems in Bedlam exhibit the influence of W.D. Snodgrass who encouraged Anne to continue in the autobiographical style and find her voice [1]. Music Swims Back to Me (1957) and Double Image are two of her signature poems in Bedlam. The Division of Parts is an elegy she wrote to her mother.

All My Pretty Ones 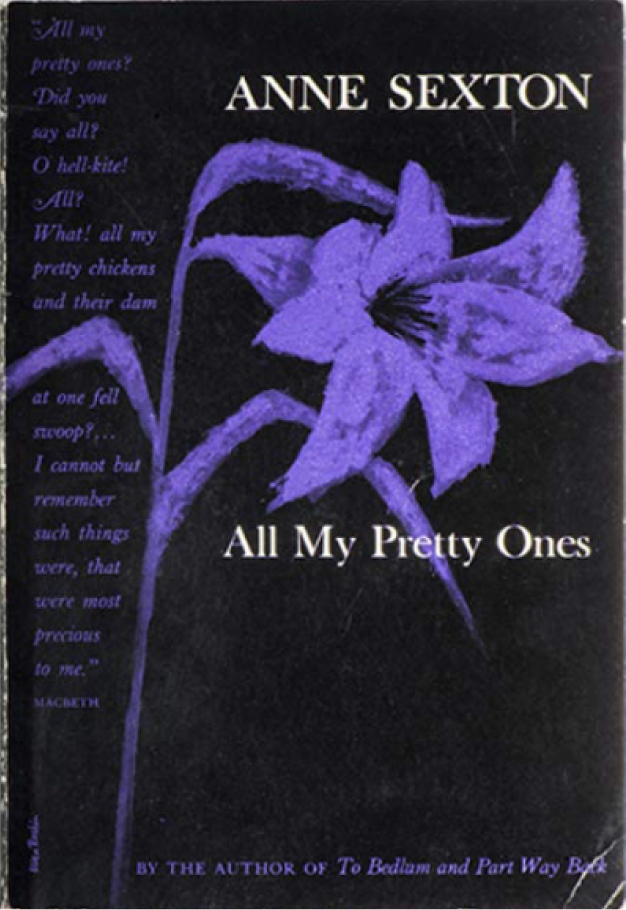 The Struggle to “Live, Live…” 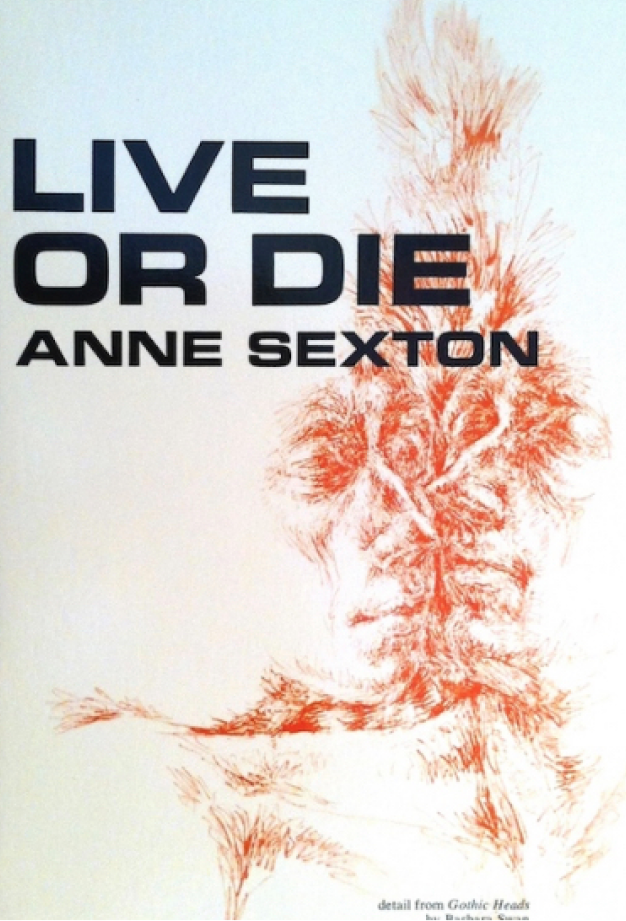 Within a decade of starting to write poetry, Anne was awarded a Pulitzer Prize for Live or Die. The collection of poems is a sobering journey into the on-going battles Anne had with her suicidal tendencies and her determinaton to Live — “Suicide…the opposite of poems”.[3] In 1963, Sylvia Plath, a poet and good friend, committed suicide. Anne grieved but was also envious as the two often talked about their deaths. Sylvia’s Death indicates as much.[4] In eight months, Anne was hospitalized twice. The final poem in Live or Die, according to Maxine Kumin, was a struggle. Then Penny, the Sexton’s dalmatian gave birth to a litter of eight puppies and provided the inspiration for Live. 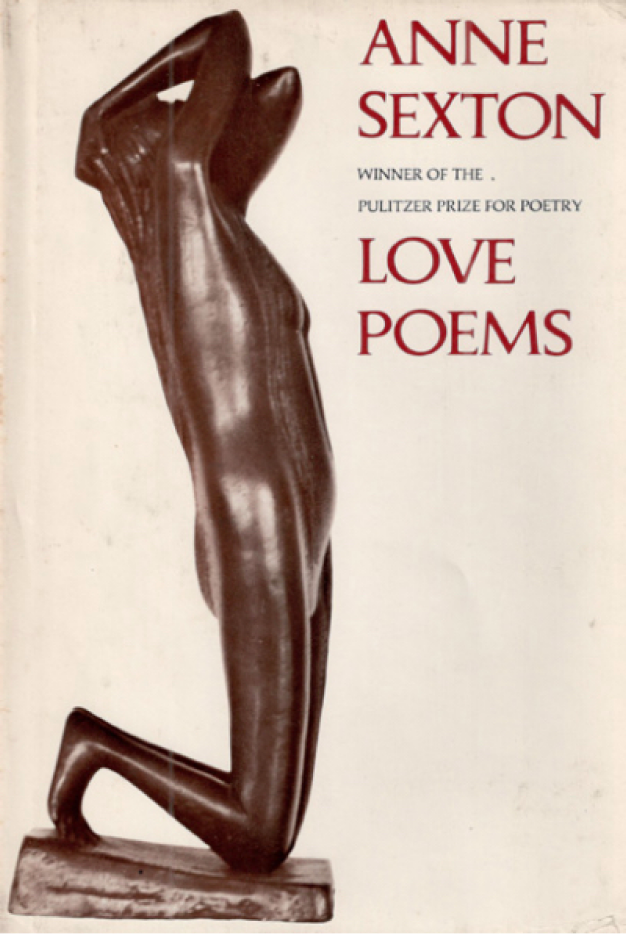 The year of sex, drugs and rock-n-roll—1969—was a good year for Anne who by now was a celebrity and established poet. An astute businesswoman and lover of the limelight, she established a keen rapport with her audience. Reciting poems with music—“Anne Sexton and Her Kind”—her readings were wildly popular. Her play Mercy Street, received rave reviews while Love Poems was met with the usual controversy though some considered its sexually explicit content had a "surprising freshness" [5]. At a reading as the first female member of the Phi Beta Kappa chapter at Harvard, Anne dedicated Eighteen Days Without You to the late Robert F. Kennedy who had been assassinated one week before.

We Women, Know the Truth 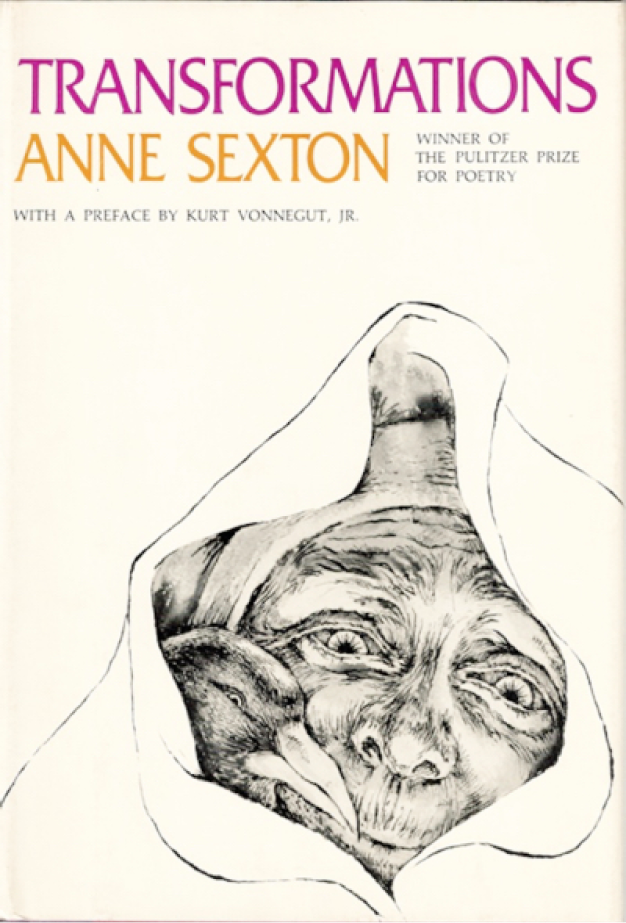 Anne’s beloved “Nana” would read Andersen and Grimm fairy tales to her as a child. A collection of Grimms fairy tales reimagined, uncensored with a significant dose of dark humor, Transformations was written in just eight months. It mocked society and the conventions imposed on women of the 1950s and 1960s. A significant departure from her autobiographical works, Houghton and Mifflin was hesitant to publish, yet Transformations became one of Anne’s most successful collections behind Love Poems. It was also her last successful collection.[6]

The Book of Folly 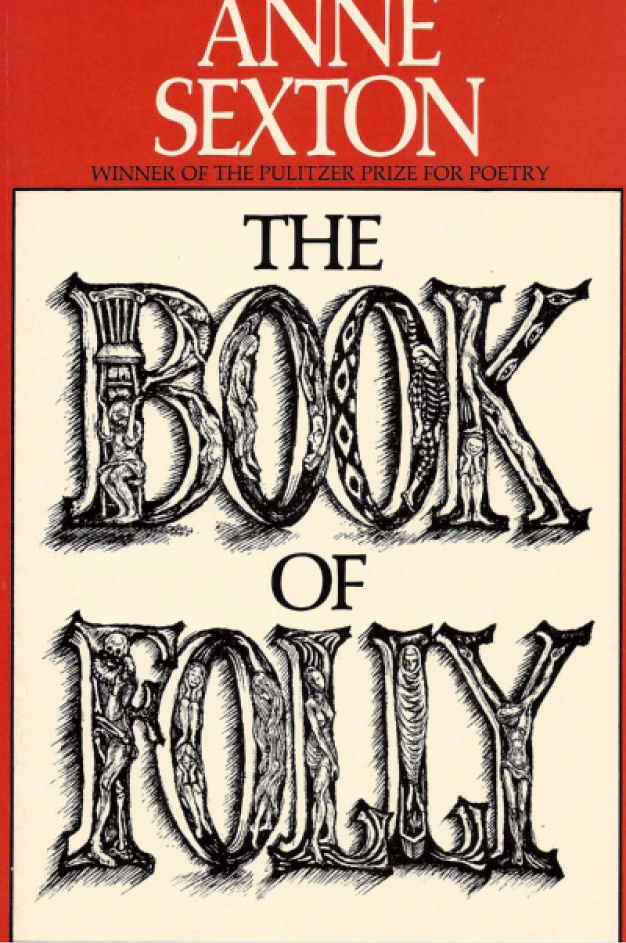 Anne Sexton was a full professor at Boston University when The Book of Folly was published and she was falling apart. Addicted to pills, alcohol and separated from her husband Kayo, the loss of domestic structure was taking its toll. By the end of 1973, her divorce final, Anne was no longer writing poems. “She was writing anguished appeals for attention”[7]. The alcohol had quashed the critic, a voice Anne once summoned to relentlessly edit her work. She had pushed away or distanced loved ones, even her psychiatrist. She was what she feared most: alone. 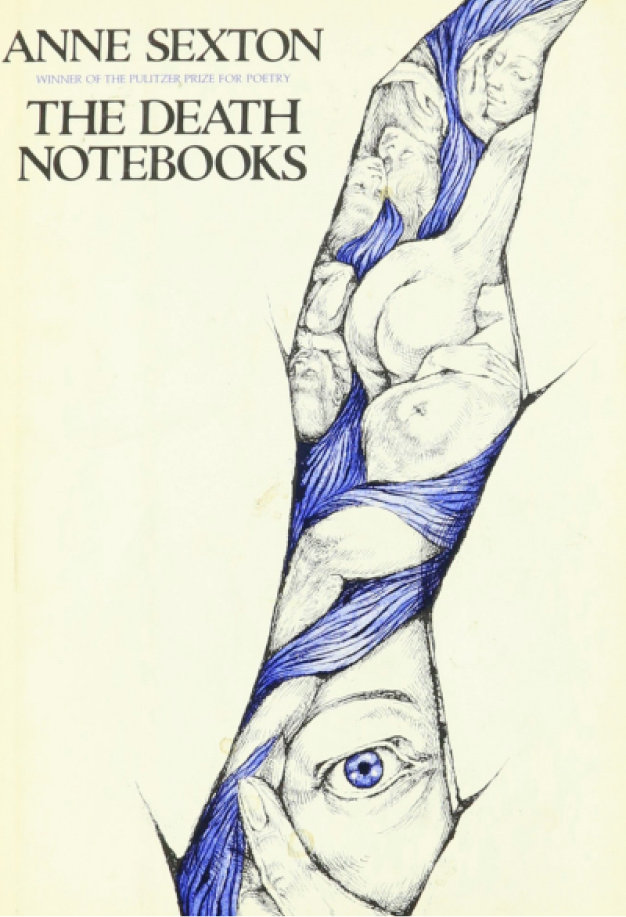 Initially planned for posthumous publication and started in 1971, Anne urgently released The Death Notebooks. She was excited about The Furies even confessing to a friend that she would live a long time. She also immersed herself as a professor; however, it was clear to some of her students that she wasn’t fully functioning. The friends she had left took turns being “on call” as her intake of alcohol, sedatives, and sleeping pills increased. While Anne feared her friends were abandoning her, they were fearful of more suicide attempts. To her closest friends, Louisa Ames and Maxine Kumin, Anne proclaimed: “You won’t get another chance to save me”.[8]

After meeting with Maxine Kumin to proof The Awful Rowing Toward God, Anne went home, dressed herself in her mother’s fur coat, got in her 1967 red Couger, turned on the engine and ended her struggles with depression. Anne Sexton was just 45 years old.

The Awful Rowing Toward God 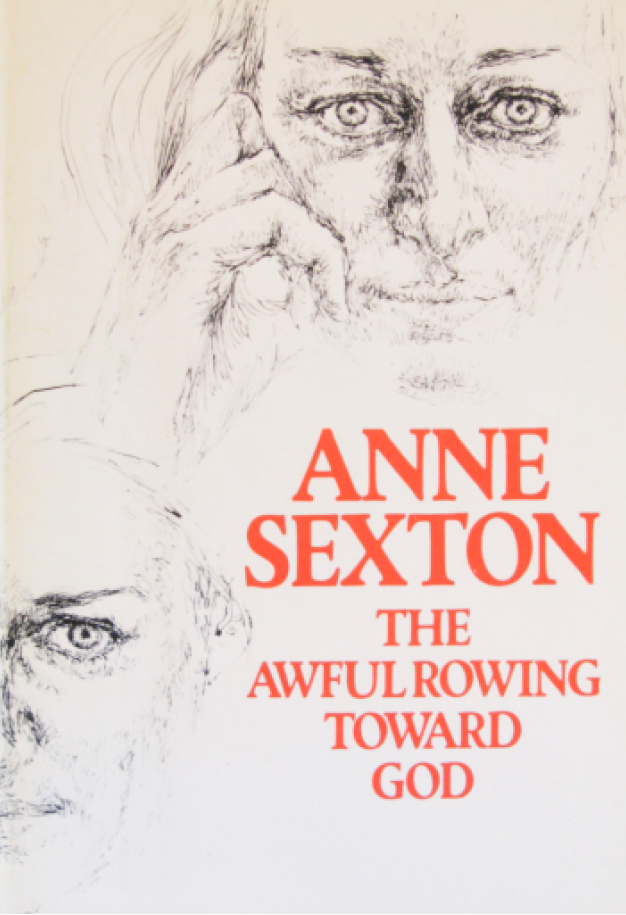 Anne, off the antipsychotic drug Thorazine and going through a manic period, began writing this collection in the early winter of 1973 at an alarming rate, according to Maxine Kumin[9]. As such, The Awful Rowing Toward God according to Katha Pollit of The Nation as “rambling, repetitive, and self-indulgent”[10] while Joyce Oates, writing for The New York Times, described the “flood of dreamlike or nightmarish” images as a means to speak directly and honestly with her readers. Though not refined in craft, The Awful Rowing Toward God, contains “poems of superb, unforgettable power”.[11] 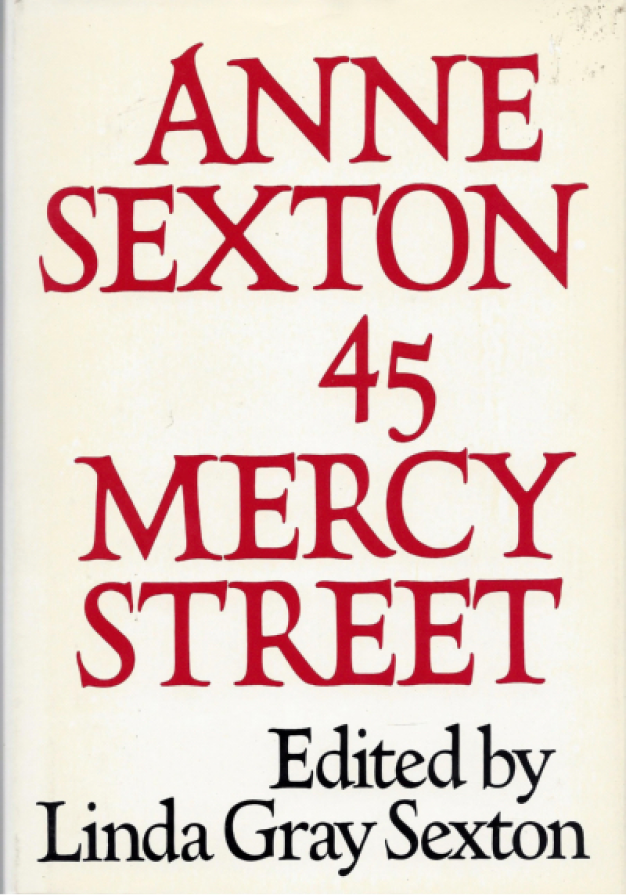 Published by her daughter, Linda Gray Sexton in 1976, 45 Mercy Street was the last posthumous collection Anne Sexton had planned. It is a collection of fears, fearlessness, and pain. She begins the collection with “The Hegira” then the sequence, “Bestiary U.S.A.”, a series of poems about animals written while Anne was in the hospital recuperating from minor surgery. “The Divorce Papers”, an account of the trauma of her separation from her husband of 25 years, composes the final sequence. According to Linda Gray Sexton, some poems were not published because of the pain they might induce. Her mother knew: “[P]art of Mercy Street is still too personal to publish for some time”[12] 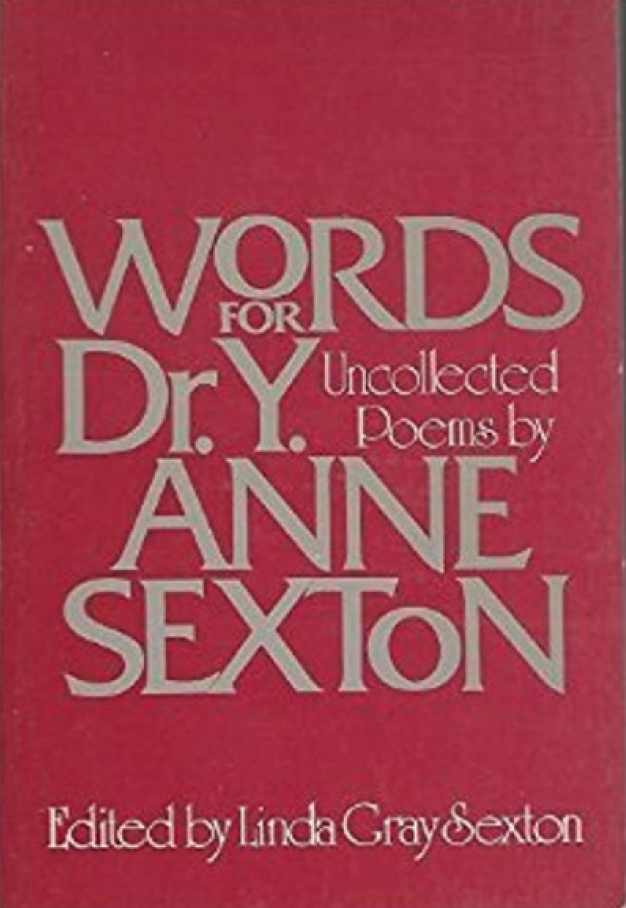 This collection of works was unearthed by the Linda Gray Sexton, while preparing for Anne Sexton: A Self-Portrait in Letters. The first part (1960-1970) of this collection was originally planned for The Book of Folly. Based on feedback, Anne decided to save them to be published after her death. The second part (1971-1973) are poems that were never published but were, according to Linda, a return to the “more stricter form, rhyme, and meter of her earlier work”.[13] Regrettably, Words for Dr. Y. was not well-received. Kirkus, a book review magazine, lambasted the collection as “nothing new, neither poetic development nor new ‘confessions’”.[14] 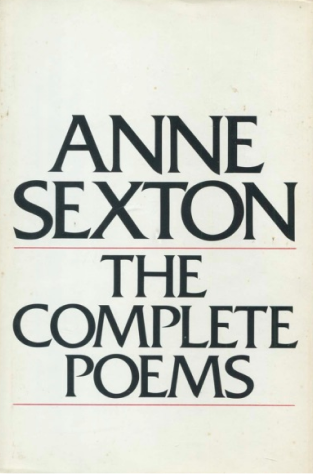 Written between March and October 1974, these poems were planned to be included in a new collection of Anne’s work. A small collection of six poems, they speak to the complexities of the meaning of love—the demise of a love affair, the saving grace of love, and what lies on the far side of love.[15] Last Poems seems a sensitive way to conclude Anne Sexton’s works, for love is what she seemed to seek most.